A too strong penalty makes the 2020 CIGT title vanish

The weekend just ended on the Monza circuit, where the last round of the Italian GT Endurance Championship took place, was full of regrets.
Daniel started from the second row having conquered the 3rd best time obtained during qualifying and thanks to an excellent pace he managed to always remain in the rear of the leading group. At the first mandatory pit stop, Mancinelli handed the car over to his teammate Agostini in 6th position just over 5″ from the provisional leader.
The pit stop benefited the Audi team which, having no handicap time to serve, managed to get back on track in third position behind the Lamborghini of Kroes/Tujula/Nemoto and the BMW of Comandini/Zug/Krohn.
Agostini – during the second hour of the race – managed to bring the gap from the first position occupied by the Huracan to just over 2″, thus delivering the car to Drudi in second position, between the Lamborghini and the BMW M6.
The three – for two laps – gave life to a thrilling spectacle made of overtaking and braking, but at the Parabolica curve Drudi found himself in the middle of a crossroads of rivals’ trajectories that did not allow him to avoid touching Krohn’s car, making her slide back and shortly after out of the race. The race direction (during the event in progress) opted for a drastic measure, penalizing the Audi Sport Italia team by 5″.
Drudi then concluded the race with an amazing victory, but the advantage over the Ferrari of Fuoco was not enough to fill the 5″ of penalty, thus dropping the team to second place and forcing the Audi Sport Italia team to finish the championship in second position.
“I would like to thank Audi Sport Italia for the wonderful season.” – Daniel said – “The whole team has always worked hard to give us a car at the top of its performance. I am sorry for the decision of the race direction, but still thank everyone for this fantastic adventure.” 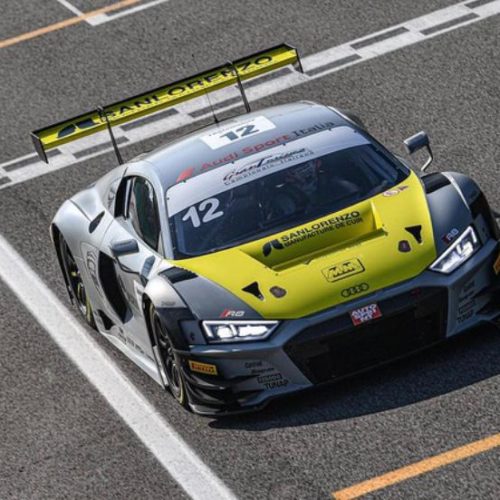