The weekend just spent on the Austin circuit, in Texas, had a really bitter sweet taste.
In the race on Friday, recovering last May’s appointment in Canada, Niccolò started from P6 (position assigned after race 1 of the Canadian weekend) and after a good start and a good first part of the race, at the mandatory pit stop he was in P4.
Just back on track, Daniel was able to push very hard, succeeding in overcoming Cadillac #8 and then #3 and going to attack the Porsche #58, winning an excellent P2 on the finish line.
In qualifications, valid for the Texan appointment, Mancinelli was able to get the second best time just 30 milliseconds from the pole position of the Cadillac #3.
On Race 1, on Saturday, September 2, the Italian driver was able to have a great stint, allowing him to get very close to the Cadillac #3 already at the first bend, but an accident at the start caused the race to be neutralized.
At the restart, Daniel tried to attack immediately the Cadillac #3, trying to put pressure on him, and getting back to the mandatory pit stop at the same time.
Niccolò, back to the track for the second part of the race, with a fine maneuver at the back of the straight, managed to overtake the Cadillac #3 and thus to win under the checkered flag.
In Race 2, starting from the first row, Niccolò due to a curb on curve 2 made a spin and buffered the Cadillac #8 causing the end of the race and the hope of a podium in the SprintX final championship.
“Unfortunately, the end result of the weekend was bitter for digest.” – Daniel said – “In Race 2 we were aware that we could do well, pity for the spin that cost us the end of the race and the hope for the podium in the SprintX championship. Thank you all the team for the great job done, which still allowed us to make a second place and win race 1. Now I’m waiting for the last weekend of the Sprint series scheduled for September 15-16 in Sonoma, California, where I will try to bring home two important results to finish the season to the best.”

A weekend full of races 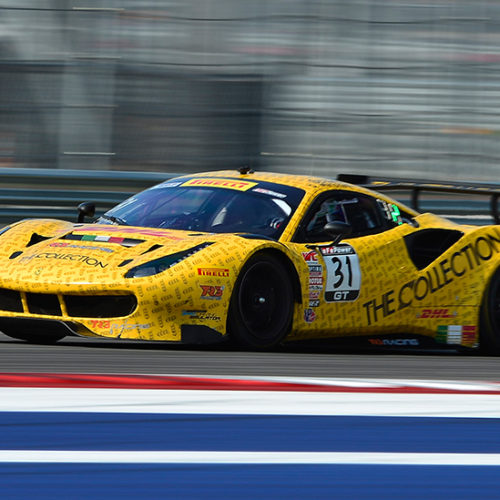